Discover the Trento of the Romans

Discover the Trento of the Romans

The present center of Trento, with its structure from the Middle Ages up to modern times, conceals a time when Trento was still called Tridentum and was an important transit point for the Romans. Founded in the middle of the first century BC, the city experienced under Roman rule such a rapid development, that it was ennobled in 46 AD by Emperor Claudius to the splendidum municipium, a splendid city.

Today, thanks to extensive and cautious archaeological explorations and excavations, one can once again experience part of this splendid city: as part of the “Tridentum-la città sotterranea” project (Tridentum – the underground city).

This project combines a whole network of archaeological sites, which gives visitors a glimpse into the Roman past of Trento: how did they live back then? What did the city look like? What was where?

The underground archaeological site of the SAS

Where the heart of Trento beats today, on the Cesare-Battisti square, was already the center of the ancient Tridentum. Only that the Roman heart had disappeared for centuries under the pavement of the square.

Today, you can visit a total of 1700 square meters of the Tridentum in the SAS subterranean archaeological site (“SASS” for “spazio archeologico sotterraneo del SAS”) and look at the Roman history of the city: public and private buildings, part of the Roman fortifications, the remains of a defensive tower and parts of a Roman street paved with local porphyry, a walkway and the sewage system.

In some of the exposed buildings you can see patios and mosaics, remains of antique floor heating and wells.

Archaeological site under the Palais Lodron

The Palais Lodron on the square of the same name is not only impressive from the outside, but houses under its foundations also remains of the southern part of the ancient Tridentum. Here archaeologists have cleared parts of the Roman city walls, a tower, a street and various private houses.

Here were also found the remains of a probably not unimportant building of the Roman Trento: that of a caupona, the shop of an antique wine merchant.

In the entrance area of this archaeological site, an area has been specially designed for children who can playfully approach archeology.

The Roman excavations at the Palais Lodron can be viewed on Wednesdays, Thursdays and Fridays (except on holidays) from 10am to 12pm and from 2.30pm to 4pm. Admission is free.

Also the central square, more precisely, the “entrails” of the Tower ‘Torre Civica’, contain an ancient secret: the remains of Porta Veronensis. The impressive gate was the entrance for the ones coming from the south, from Verona, to the Roman Trento.

The Porta Veronensis was once a twin gate, a gate with two entrances – one for people and one for cars. Built from white lime, probably two or even three stories high, the gate was flanked by two side towers, forming the starting point of the main traffic axis that crossed the Tridentum from south to north. 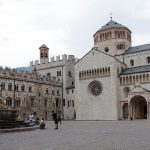